World War I was raging around him and a disease which would soon kill him left him weak and in pain, but German military officer Karl Schwarzschild was pondering one of the most profound scientific ideas of 20th-century science: Albert Einstein's theory of General Relativity.

Einstein eschewed earlier theories of gravity, which described it as an attractive force, and instead visualized it as a "warp" in space -- a curvature caused by matter. According to General Relativity, heavier and denser objects -- like planets, stars, and galaxies -- produce a greater warp in space, in essence giving them a stronger gravitational pull. 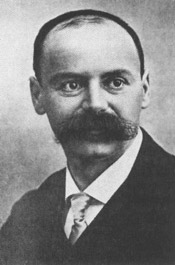 When Schwarzschild, a 42-year-old mathematician who was in charge of a German military weather station, read Einstein's new theory, which was published in 1916, he used it to make some calculations of his own. Schwarzschild found that if you squeezed enough mass into a small enough volume, its gravity would become almost infinitely strong. It would warp the space around it so strongly that nothing could escape from it -- not even light. In essence, the object would be invisible to the outside universe: matter and energy could fall into it, but nothing could come back out.

Schwarzschild's calculations provided the scientific basis for the concept of black holes. Today, astronomers suspect that millions of black holes populate our own Milky Way galaxy, and that supermassive black holes may inhabit the centers of the Milky Way and most other galaxies.

As the name says, a black hole is a hole in the fabric of space-time, like a deep well into which matter and energy may fall but may never exit. Because they never emit energy, we can know little about black holes -- only their masses and whether they spin, and if so, how fast. They might someday evaporate in torrents of energy known as Hawking radiation, releasing material back into space, although for any black hole as massive as a star or heavier, that won't happen for a trillion trillion trillion years or longer.

Astronomers discover and study black holes only because they exert a strong gravitational influence on the matter, energy, and space around them. They can "steal" gas from the surfaces of companion stars, encircling themselves with disks of superhot gas known as accretion disks. Supermassive black holes can eat entire stars and accelerate stars that orbit them to high speeds, flinging them around like horses on a merry-go-round. Rotating black holes pull the space around them as they spin, so that space itself is whipping around at a large fraction of the speed of light.

Most of what astronomers know about black holes themselves is based on theoretical models. These models say that a black hole consists of a singularity -- an almost infinitely dense pinpoint of matter that contains the black hole's entire mass -- and a horizon, which to the outside universe forms the black hole's surface. It is not a physical surface, however, but the point at which the black hole's escape velocity -- the speed at which matter or energy must travel to get away -- exceeds the speed of light. Anything passing within the horizon can never come back out: It is trapped -- in a black hole.