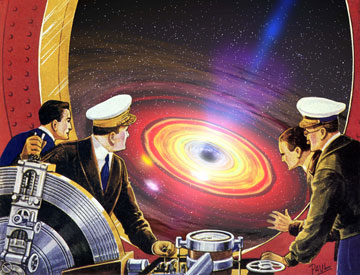 Science fiction writers — and their fans — have been fascinated by black holes since shortly after physicist John Wheeler coined the term in 1969. Though rarely depicted with rigorous scientific accuracy, black holes never fail to steal a scene — or at least help the writer advance the plot to the next one.

In myriad films, TV programs, and books, black holes fuel futuristic spacecraft, trap them when they err off course, or swallow them whole and spit them out on the other side of the universe. In the world of popular music, the black hole metaphor provides a lyrical stand-in for mysterious forces, depression, or even death. On the lighter side, a humorous discourse on the true nature of black holes by a couple of Canadian ne'er-do-wells provides much-needed comic relief.

Here is a selection of some of the best — and worst — roles played by black holes in movies, TV shows, books, and music: