At the heart of every star, a battle is taking place. In a way, it's a battle between matter and radiation. But eventually, the same side always wins: matter. 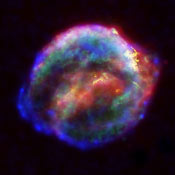 A stellar-mass black hole may form in a supernova explosion.

Stars are big balls of gas. They contain so much gas that it's pulled in tight by one of the fundamental properties of matter: gravity. This makes the cores of stars dense and hot. They're so hot, in fact, that they ignite the process of nuclear fusion, in which atoms of lighter elements combine to make heavier ones. The most fundamental fusion process combines atoms of hydrogen - the most abundant element in the universe - to make helium.

Fusion releases energy, which is why the stars shine. The energy exerts an outward pressure on the star, creating a delicate balance - gravity pulling in, radiation pushing out. The exact balance depends on the mass of the star. Heavier stars are squeezed more tightly, which revs up the nuclear reactions, producing more radiation.

When a star finishes off its nuclear fuel, though, the balance tips toward gravity. How far it tips again depends on mass.

Stars like the Sun produce fusion reactions for several billion years. When the process ends, their cores collapse to form dense, hot balls known as white dwarfs. A typical white dwarf is about as massive as the Sun, but only as big as Earth.

Any stellar core that weighs more than 1.4 times the mass of the Sun (the cores of stars that start life several times as massive as the Sun) will collapse even farther, forming a neutron star. (The star's outer layers are blasted into space in a titanic explosion called a supernova.) A neutron star is an object in which gravity has even squeezed out the space between the particles in atoms, forming a ball of solid neutrons. A neutron star is more massive than the Sun, but only about as big as a city. A chunk of its matter the size of a sugar cube would outweigh a thousand battleships.

In the most massive stars, though, the collapse doesn't end there. The core of such a star collapses to almost infinite density, forming a black hole. This should happen with any stellar core that is at least three times the mass of the Sun.

Alternatively, some astronomers hypothesize that the blast from the layers surrounding a newly formed black hole may be far more more powerful than a typical supernova. These explosions may create "gamma-ray bursts" - blasts of high-energy gamma rays that can outshine many galaxies-worth of normal stars.

The debate shows that even at their violent births, black holes hold on to their secrets.