Seen from afar, our Milky Way would look something like a pancake with a big blob of melting butter at its center. The pancake is the galaxy's thin disk, while the butter represents a large "bulge" of stars at its center. And at the center of the bulge is a black hole that's several million times the mass of the Sun. 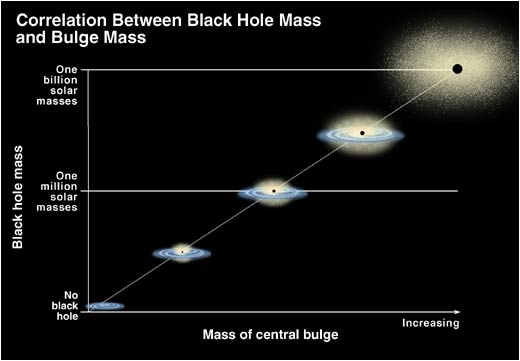 The sample of black holes is large enough that it's unlikely that this relationship is just a coincidence. Instead, the birth of the black hole and the galaxy seem to be intimately related.

Astronomers have devised two theories to explain this relationship.

The first theory says that in the very early universe, galaxies were all fairly small, and they were born with black holes equal to 0.15 percent of their mass. These galaxy fragments quickly merged to form bigger galaxies. As they did, the black holes in their cores merged, too, maintaining the ratio of black-hole mass to the mass of all the gas and stars.

The second theory says that the black holes started relatively small, then grew as the galaxies formed around them. However, the process that increases the size of the black hole releases copious amounts of energy back into the galaxy. This energy interacts with the galaxy to regulate the galaxy's ability to make stars. The energy release also shuts off the black hole's own fuel supply by pushing away the surrounding clouds of gas and dust.

In other words, at a specific ratio of black-hole mass to galaxy mass, the black hole effectively stops both the galaxy and itself from getting any larger. This remarkable process happens when that ratio is 0.15 percent.

Observations and computer simulations made over the last decade seem to favor the second explanation. They suggest that small "seed" black holes, which formed in the very early universe, served as gravitational "roots" for the clouds of gas around them. As a cloud of gas collapsed inward, some of its mass was funneled into the black hole.

In these systems, the gas would form a broad, flat disk around the black hole. The disk was heated to millions or billions of degrees, causing it to produce enormous amounts of X-rays and other forms of energy. These systems are known as quasars -- some of the brightest, most energetic objects in the universe. A quasar can emit as much energy as an entire galaxy of stars, which can span tens of thousands of light-years, but from a volume of space no larger than our solar system, which is only a few light-hours across.

Astronomers continue to study quasars, as well as the supermassive black holes in quieter galaxies, to understand the intimate relationship between a galaxy and its central black hole.