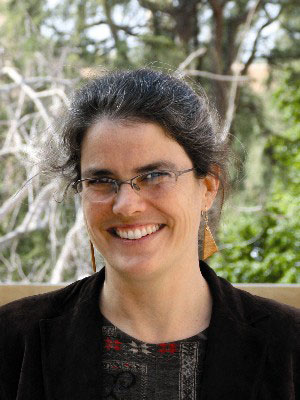 The goal of astronomical research is to solve the puzzles of the universe, from how stars and planets are born to whether supermassive black holes inhabit the hearts of galaxies. For puzzle hound Andrea Ghez, an astronomer at UCLA, science is a natural fit. In this interview, she discusses her early interest in space, her fascination with puzzles, and her early career as an astronomer.

I was a young kid with the Apollo missions, and that certainly captured my imagination. I was four years old. My parents and my grandparents were just fascinated with this, so very early on I was captured by this field of space exploration. My parents then bought me a telescope, but living in Chicago I quickly went from looking at the Moon to exploring other people's apartments, because that's really what you could see rather than the night sky. So I think there was an early fascination, but it was also competing with the desire to be a ballet dancer when I grew up. I've always maintained a fascination for puzzles, I think I always loved puzzles when I was a kid, loved math, so when I went to college I thought I was going to be a math major. But I quickly got rebit by the astronomy bug. I majored in physics but always did a little research in astronomy and astrophysics and went from there. So I would say that the early fascination was the Moon landings and then just sort of a fascination for math and puzzles that kept me going — jigsaw puzzles, crossword puzzles, now Sudoku puzzles, Kenken puzzles, I still love 'em. I do Sudoku every day. Every day.

You said you were also interested in being a ballerina, what were some other interests that you had when you were a kid?

For a while I had a stamp collection, I was really into sports, played field hockey, ran track, I dunno, I guess I had all the usual kid interests. I certainly had lost the ballet bug by the time I got into high school, realized that I didn't have that much talent for it and that it's a hard life. I was getting really interested in more academic pursuits at that point, but, you know I was highly involved in sports at that point as well, and music! I played the flute a lot. That was sort of a big passion early on. Played that through college and still pick it up every once in a while. Very rarely, but it's a fun thing to do.

How did you parlay the interest in math and the interest in science into deciding, "Okay, I'm going to be an astronomer." You started at MIT, got your Master's degree at MIT, so what were the steps along the way to get you there?

It was very random. In college, I think I changed my major almost as often as I changed my socks. I went in saying that I was going to be a math major but then quickly I decided that I wanted to be a chemistry major, and then in a short space of time I explored the concept of mechanical engineering, then aerospace engineering and then landed in physics — I was really having fun taking intro courses to a few things. I think somewhere around the end of my second year I really settled on physics. I thought that that was a field that allowed me to keep my options open for as long as possible, and then I had a wonderful physics instructor who was in astronomy and astrophysics and I got involved in research through him. That was what really got me hooked – going to the telescopes, writing computer programs, getting all this data. It was one more puzzle that I liked to do.

The first time I went to the telescope, a real research facility, was my junior year in college and I got the opportunity first to go to Kitt Peak, where MIT had a facility. It was a Schmidt telescope, which uses a very old-fashioned mode of observing where you're out in the dome – there's no cozy data room and you use the eyepiece to guide. It was a very wonderful experience. It was the middle of the winter, so it was rather cold. You're out under the night sky all night long, literally looking at the skies with your own eyes and with this fabulous facility where we were actually using photographic plates – I think it's amazing that I got exposed to this technology – and developing that in a darkroom. That was fun because I had an early interest in photography, so that was good timing to an earlier interest as well.

The research was identifying optical counterparts to X-ray sources – I was working with a group of people doing X-ray astronomy. I got to go to Chile to use the same kind of instrument down there, and then I realized, 'Ah, you get to travel in this business, not only to use these wonderful instruments in asking scientific questions but you get exposed to all parts of the world,' which is an easy way to convince somebody that this is a really fun field to get into.

So what was the next step? How did you go from that early experience to becoming a professional astronomer?

Coming out of MIT, which does not have an astronomy degree program, I was very convinced that physics was the way to go in terms of training. So when I applied to graduate school I was very interested in schools that allowed me to get a physics degree and yet study astronomy and astrophysics. That's how I ended up at Caltech getting a physics degree in this field.

One of the reasons I was interested in going to Caltech is their amazing facilities. I had already been bitten by the observing bug, so I was looking for a place that would give me opportunities. Because I had been in this high-energy astrophysics group, I was also looking for another place where I could look at high-energy astrophysics. Caltech has both the astrophysics and the optical facilities, and just enough choices – you never really know what you're going to end up wanting to do.

How and when did you first develop an interest in studying black holes?

Ironically, when I went to grad school I really wanted to study black holes. So I looked for a project that would allow me to get involved in that. The first program I signed up for was with a professor named Tom Prince. He had this wonderful balloon project which had a method with a mask for identifying where these high-energy sources were coming from. It was very computationally intensive in terms of solving a puzzle, and that appealed to me greatly – the idea that you didn't just see your object, you had to figure out what it was. When I first arrived he had just gotten involved in a new program to use the optical telescopes to use a new technique to compensate for Earth's atmosphere, called speckle imaging....

I ended up working with Gary Neugebauer, who was a wonderful adviser. While at the beginning of this project the first proposal that we wrote to the National Science Foundation promised that we could study black holes at the center of galaxies, we didn't get there because the technique was not sensitive enough. So I did something completely different than what I set out to do, which is to study how young stars form and whether they're in binary systems. It was fun; we found things we didn't expect to find. We found out that almost every star we looked at was a binary star. In spite of the fact that we had these ideas about star formation that revolve around single stars like our Sun, we found that almost everything starts its life out as a binary star. That was a lot of fun but certainly not what I anticipated going into. Today I've come back to what I wanted to do at the get-go, which is to study black holes because the technology's advanced enough – the detector technology – that this technique can now do what we always promised it could do.

The star formation research kept going for quite awhile. It was certainly the focus of my research as a postdoc, which I did in Arizona, another place that has fabulous telescope facilities. As is often the case with research, you might start pursuing a project with one question and you end up not only answering that but with many more. Given that we found many more companion stars than we had expected, then there were a lot of questions having to do with whether or not all areas of star formation, all stellar nurseries, produced binaries or whether it depended on what kind of star formation region you were in. We did lots of surveys of different regions. I was also interested in what impact a companion at birth would have on the potential for star formation. I studied many known systems to look for the influence of that companion on the dust distribution around it, given that the dust distribution forms the building blocks for future planetary systems. There are a lot of interesting questions to pursue.

And what answers did you find to those questions?

Some of the highlights were that not all regions are equally efficient at forming binary stars. It seemed to depend on the density of the region – that was interesting, it was definitely a clue in terms of what might control whether you get one star or more than one star out of the system. The other things that we found are that companions had to be really close in order to affect the chances for planet formation. In other words, if you had a companion that was located at distances that correspond to the size of our solar system it wasn't a deterrent to planetary formation, or it wasn't likely to be because all the initial conditions were equivalent to what you would see around single stars.

At this point we had so many observations of these objects that we started to see them orbit one another, so we realized we could do yet another project which is to follow the orbits of these stars to test what masses they have. That would allow us to test evolutionary models, and that's important because the evolutionary models are generally the only thing that tell you the mass of the object, and the mass of the object is the key property that determines the future evolution of a star. You can see into a star's future if you know its mass. That's a project that's still ongoing today. I seem to have invested a lot of my career in long-term projects that require a lot of patience. I like to compare them to winemakers — you need a lot of patience because wine just gets better with time. 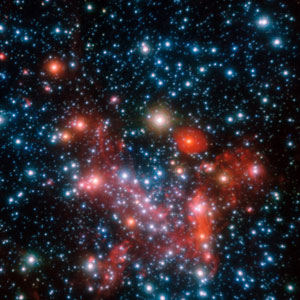