The universe is vibrating like a concert hall where the orchestra is warming up — a symphony of overlapping waves rippling through space itself. No one has yet detected a single ripple, but scientists are looking for them. And their discovery would tell us about some of the most energetic events in the universe — and about the nature of the universe itself. 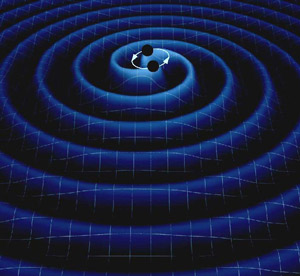 Gravitational waves are so tiny that they have been impossible to detect. Only massive, fast-moving objects, such as two neutron stars or black holes in orbit around each other, produce waves that are strong enough to detect. And even then, detecting them will require ultra-precise instruments that monitor the universe for months or years at a time.

Despite the challenges, the search is on, and scientists hope to discover these elusive waves in the next few years.

These radio programs offer a glimpse of gravitational waves and the quest to discover them. We will offer a longer look at this exciting field of astrophysics soon.

Can we detect gravitational waves produced by orbiting black holes?

Gravitational waves have not yet been detected.

On the Edge: Gravitational Waves

Hope for breakthrough in search for gravitational waves

LIGO: A new way to explore the universe