LONG BEACH, California (January 5, 2009) -- The region around a supermassive black hole is a bad neighborhood for stars. The black hole’s gravity pulls apart stars that pass too close, and rips potentially star-forming clouds of gas and dust to shreds in a process that one researcher describes as “spaghettification.”

Even so, a team of astronomers says it has found at least two infant stars orbiting close to the supermassive black hole at the center of the Milky Way galaxy. The stars probably were born quite close to the black hole, in the middle of the bad neighborhood.

A team led by Elizabeth Humphreys of the Harvard-Smithsonian Center for Astrophysics studied the environment around the black hole, which is known as Sagittarius A* (“A Star”), with the Very Large Array, a collection of 27 radio antennas in New Mexico. Signals from the antennas are combined to produce images and other observations. 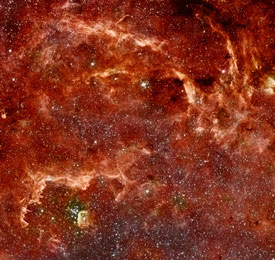 A swirl of stars, gas, and dust surrounds the supermassive black hole at the center of the Milky Way at the lower right of this recent infrared image from the Hubble and Spitzer space telescopes. This image spans 300 light-years. Despite the black hole’s great mass, it is far too small to see. [NASA/ESA/Q.D. Wang (Univ. Mass., Amherst)/JPL/S. Stolovy (SSC/Caltech)]

“Near the supermassive black hole, chaos reigns,” Humphreys said during a briefing at the American Astronomical Society conference. The black hole’s gravity pulls apart nearby gas clouds, leaving strands of gas that cannot coalesce to form a star. “Yet many stars are observed near the black hole,” she said.

It’s unlikely that the stars formed farther out and migrated toward the black hole, but it also “seems impossible” that they formed as close to the black hole as they are today, Humphreys said.

To test the origin of these stars, Humphreys and her colleagues from CfA and the Max Plank Institute for Radio Astronomy looked for water masers within a few light-years of the black hole, which is about 27,000 light-years from Earth.

The masers are clouds of gas that amplify background radio signals. They can be associated with newly forming stars or with the extended outer layers of very old stars.

The team found 12 masers near the black hole, and used other tests to determine that 10 are associated with old stars. That left two masers associated with the stellar embryos known as protostars. One of them is about 7 light-years from the black hole, while the other is about 10 light-years away. Combined with an earlier discovery by another team, that provides a sample of three stars that are so young that they must have formed where they are seen today, near the black hole.

“We believe that the only explanation ... is that we have indeed discovered protostars right at the heart of the Milky Way,” Humphreys said.

One of the newly found protostars resides inside a broad disk of gas and dust around the black hole. The disk may be thicker and clumpier than astronomers had thought, Humphreys says. Thicker clouds of gas and dust would have enough gravity to defy the black hole, which is trying to pull them apart, and collapse under their own weight to form new stars.

The finding suggests that while the environment around a supermassive black hole can destroy stars, it can also help create them. — Damond Benningfield