(From the January/February 2008 issue of StarDate magazine)

If you ever travel through the galaxy in a starship, keep an eye open for “rogue” black holes. Hundreds of these refugees from globular star clusters may populate the Milky Way, with masses of 10 to several thousand times the Sun’s and speeds of several million miles per hour. 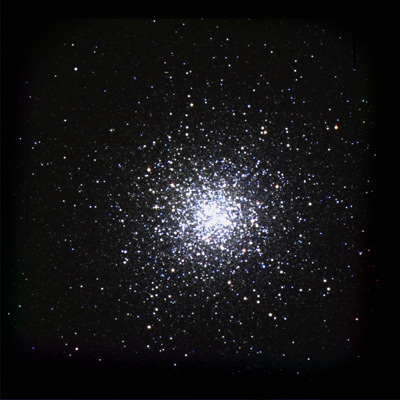 M13 is one of several globular clusters in the Milky Way that appears to have an intermediate-mass black hole at its center. [Daniel Folha and Simon Tulloch/Isaac Newton Group of Telescopes, La Palma]

Astronomers who are now at Vanderbilt University simulated the complex gravitational dances among smaller black holes in the centers of globular clusters — dense balls of hundreds of thousands of stars that inhabit the Milky Way’s halo — and found that they can kick out some of the black holes at very high speeds.

The black holes “are ejected from globulars by gravitational-wave emission during mergers with smaller black holes,” Vanderbilt astronomer Kelly Holly-Bockelmann said during a meeting of the American Astronomical Society in January.

At an age of 10 billion years or more, globular clusters are the oldest structures in the galaxy. Today, they contain only old, faint stars. Their bright, vigorous stars long ago exploded as supernovae. The cores of these stars collapsed to form neutron stars or black holes. Each globular may have given birth to many black holes, each of which is a few times as massive as the Sun.

If there is a large discrepancy between the masses of the two black holes, though, the merged black hole may be kicked out of the cluster at speeds of up to 9 million miles per hour (14.5 million kph).