MIAMI — The black hole at the heart of the Andromeda galaxy has been acting up lately. In early 2006, the disk of superhot gas around the black hole suddenly erupted, spraying energy and particles into space. And since then, the disk has continued to produce about 10 times more energy than before the eruption, say researchers attending the spring meeting of the American Astronomical Society.. 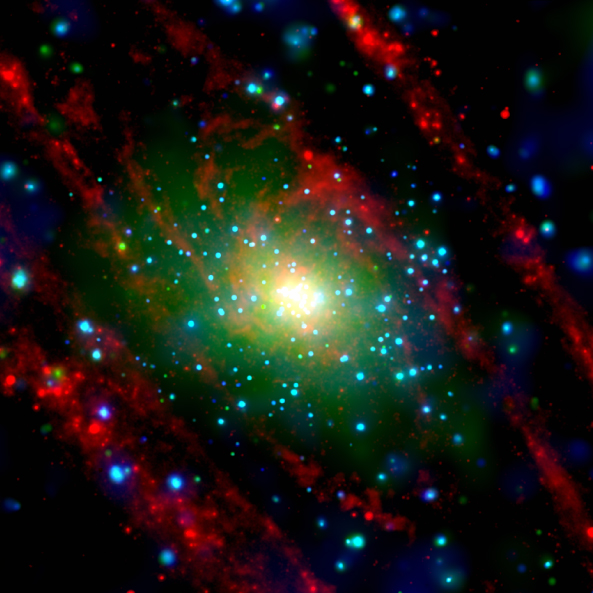 A combined X-ray and infrared view of the center of M31. The black hole is embedded in the bright cloud at center. [NASA/UMass/Z.Li & Q.D.Wang]

Using the orbiting Chandra X-Ray Observatory, astronomers have monitored the black hole, known as M31* (“M31-star,” for another name for the galaxy), since late 1999. Although the black hole is perhaps 30 million times as massive as the Sun, it is quieter than any other known supermassive black hole except the one at the center of the Milky Way.

In January 2006, however, Chandra discovered that M31* had flared to 100 times its previous brightness. (Chandra had not been watching the galaxy for several weeks before the event, so the date when the outburst actually began is uncertain). M31* soon calmed down somewhat, but it has remained about 10 times more active than it was before.

“Of course, the next question we want to ask is, ‘What's happening there?’,” says Zhiyuan Li of the Harvard-Smithsonian Center for Astrophysics, one of the astronomers who is watching M31*. “In fact, this is really puzzling, and we now only have a tentative understanding of this phenomenon.”

Li says the outburst may have been an eruption of superhot gas, known as plasma, that is similar to eruptions on the surface of the Sun.

The disk of gas and dust around the black hole rotates, generating powerful magnetic fields. The lines of magnetic force may become entangled, then snap. That produces an outburst of X-rays and other forms of energy, and ejects large blobs of plasma into space. On the Sun, the same process produces solar flares and big “burps” of particles known as coronal mass ejections.

The supermassive black hole at the center of the Milky Way, which is only about one-tenth as massive as M31*, has produced similar (but smaller) outbursts. “If our interpretation is correct, or even just partially correct, it opens a new line for us to understand a possible mechanism for feedback from the supermassive black holes” into their surrounding galaxies, Li says. — Damond Benningfield 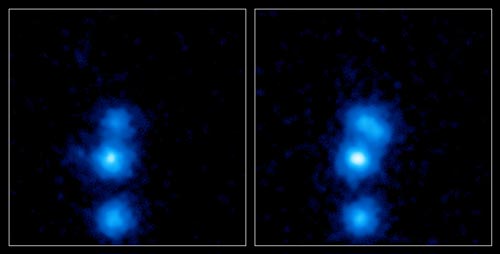 X-ray images show the center of the Andromeda galaxy before (left) and after a flare-up in early 2006. The black hole is inside the top blob. [NASA/CXC/SAO/Li et al.]