(From the January/February 2008 issue of StarDate magazine) 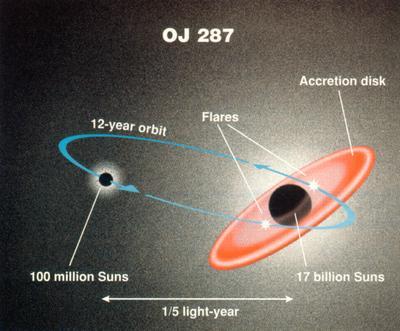 A diagram of the binary black hole that powers OJ 287. [VISPA]

A quasar can outshine an entire galaxy of normal stars, yet its power comes from a volume of space about the size of our solar system. Current models say quasars are powered by a large disk of superhot gas spiraling around a supermassive black hole.

OJ 287 was discovered in 1891, although it was not identified as a quasar until the 1960s, after astronomers discovered that there was something odd about these bright but compact objects. It is one of the nearest quasars, at a distance of about 3.5 billion light-years. It is in the constellation Cancer, and through optical telescopes it looks like a faint, fuzzy galaxy.

But twice every 12 years, OJ 287 flares up, with each outburst lasting several days.

The flareups and other evidence suggest that the system consists of the two giant black holes. The smaller one orbits its bigger cousin once every 12 years. Its orbit is stretched out, with a minimum distance of about one-fifth of a light-year — about 5,000 times the distance between Earth and the Sun. The orbit is also tilted in relation to the disk of hot gas around the larger black hole. Twice during each orbit, the smaller black hole passes through the disk, stirring up the gas around it and causing the flareups.

The team predicted that a flareup would occur on September 13th, 2007, and mobilized astronomers at 30 observatories in 10 countries to look for it. The observations were tricky because Cancer was rising shortly before the Sun at the time, so each observatory had only a few minutes to monitor OJ 287 before the rising Sun overpowered it. But the global coverage provided around-the-clock observations of the quasar.

The outburst came right on cue, and it brightened and faded just as the astronomers had predicted, providing solid evidence that the model is correct.

The same team will be looking for more confirmation of the binary black-hole model in about eight years, when the next outburst is due from OJ 287. — Damond Benningfield